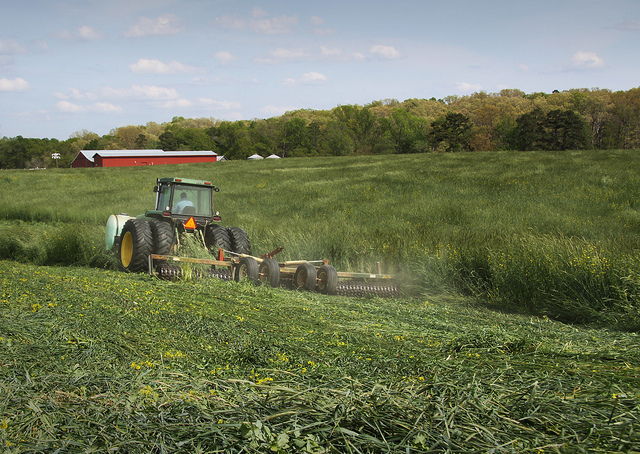 Cover crops are catching on in Iowa. Over the last decade, farmers in the state have significantly increased the acreage of cover crops; as of 2016 an estimated ​6​00,000 acres were cover cropped. Even with such seemingly high numbers, we’re still only at a fraction of the acres needed to meet the goals of the Iowa Nutrient Reduction Strategy (INRS). The state’s strategy, which recognizes cover crops’ water quality benefits, calls for at least 12 million acres or 50 percent of Iowa’s corn-soybean fields to be cover cropped.

To scale up the practice, Iowa has launched a first-in-the-country “good farmer discount” as part of a Cover Crop – Crop Insurance Demonstration Project.

Through the new discount program, cover crops on “new” acres (those not already getting cost share from federal or state conservation programs) are eligible for a $5 per acre incentive through their crop insurance. This good farmer discount was made possible thanks to an innovative agreement developed between the Iowa Department of Agriculture and Land Stewardship (IDALS) and the U.S. Department of Agriculture’s (USDA) Risk Management Agency (RMA).

Acres enrolled and certified through the IDALS program by January 15, 2018, can get the discount on next September’s crop insurance invoice. Please note, however, that accepted recipients may be based on the popularity of the program and who applies first. The demo was announced as a three-year program, with $1 million pledged for the first year to discount up to 200,000 acres. Although it’s a relatively small reward, the Sustainable Agriculture Research and Education (SARE) program survey suggests that a discount through crop insurance would be one of farmers’ preferred types of conservation payment.

Iowa’s new incentive will be available for fall-planted cover crops followed by a spring-planted cash crop. Acres that were seeded before the program was announced are also eligible for enrollment, and cover crop seeding dates were recently extended. So depending on the weather, there is still opportunity to seed more acres this fall. Due to the technical requirements for verifying which acres are eligible for participation according to land units, some policies may be excluded (such as Whole-Farm Revenue Protection or those covered through written agreements).

Participating farmers must follow all existing good farming practices required by their policy. RMA has encouraged all crop insurance agents in Iowa to participate, and every Approved Insurance Provider in Iowa has opted to participate in the program.

The Case for Cover Crops

Numerous studies show cover crops build soil, hold nutrients and water, and improve wildlife habitat. They can also boost long-term soil health and productivity, reduce herbicide costs and provide livestock forage. Cover crops for Iowa farmers may include small grains, cereal rye or oats, and some brassicas (like turnips), and are planted between crop seasons to provide a living cover on fields. Despite their proven benefits, cover crops can add to farmers’ costs and can be tricky to successfully integrate into a farm’s cropping system.

“Farmers are now seeing the cash in cover crops through improved weed control during the soybean year,” said Sarah Carlson of Practical Farmers of Iowa (PFI), who has been conducting on-farm research with PFI members to develop recommendations. “Getting living roots in the ground -year-round through cover crops is one of our best opportunities to achieve conservation goals in row-crop systems while growing corn and soybeans better.”

Carlson spoke about the practice at two recent field days that helped launch the new cover crop incentive, along with farmer hosts and agency officials.

Behind the scenes, Carlson was instrumental in paving the way for the program. She worked closely with the Iowa Farmers Union (IFU), the Iowa Environmental Council, the Natural Resources Defense Council, and with USDA in order to develop and launch the discount initiative.

Aaron Lehman, president of IFU, hosted one of the cover crop field days. Lehman has been having increasing success with cover crops on his fifth-generation family farm in central Iowa, where he raises conventional and organic corn and soybeans, oats and hay. Lehman believes that, in the long-run, cover crops will increase the resiliency of his farming system and improve environmental performance, especially in years with weather extremes.