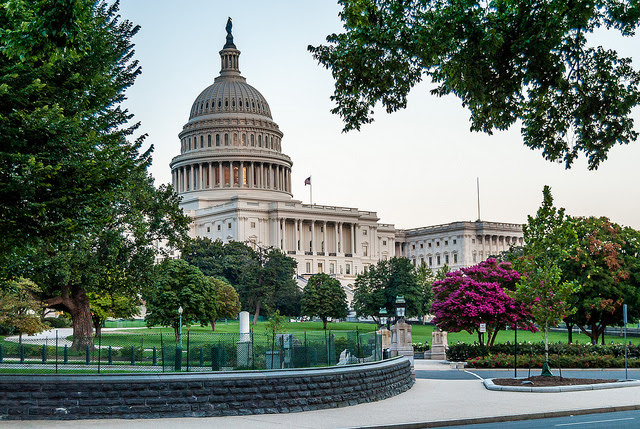 Over 100 House Democrats sent a unified message to farm bill conferees this week – the final 2018 Farm Bill must retain critical conservation programs and environmental protections. The letter, which was led by Representatives Donald McEachin (D-VA), Earl Blumenauer (D-OR), and Jared Polis (D-CO) and signed by 104 other House Democrats, underscored to House and Senate Agriculture Committee leadership that a conference report that undermined critical conservation programs or weakened environmental laws would not have their support. With the previous farm bill set to expire on September 30, Congress members are acting with increasing urgency to ensure that the priorities of their communities are being considered by the farm bill conference committee.

The letter outlined significant concerns with conservation provisions in the House passed farm bill (H.R. 2), including the elimination of the Conservation Stewardship Program (CSP). It also spoke out against the inclusion of several anti-environment provisions that threaten public health, local ecosystems, and trample on existing state and local laws. Congressman McEachin added the following comments in a press release announcing the delivery of the letter:

“The House-passed bill contains several anti-environmental provisions that undermine bedrock protections. I cannot support a conference report that I know will diminish our ability to protect the environment by eliminating conservation programs, threatening public health, and weakening forestry management and wildlife programs. Neither can the large group that signed this letter.”

The signatories to the House letter, who also stood united in ensuring that H.R. 2 did not receive a single Democratic vote, now have the opportunity to help ensure that the final conferenced farm bill does not weaken environmental protections or threaten critical conservation programs like CSP.

Assuming that farm bill negotiators are able to produce a bipartisan and bicameral compromise bill, the next step in the process will be to bring the negotiated bill before each chamber for passage. In order to reach that compromise, however, a lot of difficult conversations will need to be had.

These 107 House Democrats have sent a strong message to farm bill conferees that sustainable agriculture priorities are going to have to be considered in order to pass a negotiated bill in their chamber. Conferees must also consider that seven Democrats from the House Agriculture Committee, including five conferees, co-sponsored the SOIL Stewardship Act – a marker bill dedicated to protecting CSP and working lands conservation funding. Most farm bill conferees hail from states that would be harmed tremendously by the House proposed elimination of CSP, as detailed in a recent National Sustainable Agriculture Coalition (NSAC) report.

Standing up for Conservation in the Senate

House Democrats aren’t the only ones taking a stand on conservation and the environment. Last week, 38 Senators sent a letter urging farm bill conferees to avoid including any anti-environmental policy riders in their final bill. Senators Ben Cardin (D-MD) and Tom Carper (D-DE) led the letter, which opposed the inclusion of any controversial environmental riders in the conference bill. The letter specifically addressed the signatories’ opposition to the House’s inclusion of controversial, anti-environment riders, and highlighted that all signatories to their letter had also voted for the bipartisan Senate bill. The 38 Senators signed on to the conservation letter included nearly all of the non-conferee Democrats (conferees do not sign on to letters addressed to the conference committee) from the Senate Agriculture Committee, including Senators Bob Casey (D-PA), Amy Klobuchar (D-MN), Michael Bennet (D-CO), Kirsten Gillibrand (D-NY), and Tina Smith (D-MN).

Always an important part of the farm bill process, non-governmental food, farm, and environmental organizations have also been playing active advocacy roles when it comes to supporting conservation. Two letters were recently sent to farm bill conferees, both of which were signed by the  NSAC, outlining priorities for environmental issues in the farm bill. The 2014 Farm Bill cut total conservation funding by nearly $6 billion (with sequestration cuts factored in), which has resulted in qualified farmers, ranchers, and foresters being turned away from conservation programs that could increase both their sustainability and profitability. The letters make clear that this should never happen again.

The first of these letters, which was signed by over 170 organizations, urged farm bill conferees to ensure that the final conference report protects conservation funding and programs (including CSP) and does not include any environmental riders.

The second letter, which was signed by over 70 organizations, focused on retaining the funding for and structure of programs in the farm bill’s Conservation Title. This letter explicitly outlines that in order to protect long-term conservation title integrity and funding, the next farm bill must do the following: make no cuts to overall conservation baseline; protect future conservation funding over the ten-year funding window; retain the complete suite of conservation programs; and protect against cuts through the annual appropriations process.

Everyone Can Take Action

Opportunities to engage in the farm bill process and stand up for sustainability priorities are not limited to those in Congress or to organizations; individuals can get involved too, and their voices are a very important part of Congress members’ decision making process! Not sure where to start? A great first step is to head over to NSAC’s “Take Action” page and sign on to our 2018 Farm Bill priorities petition.

Another great way to stay up-to-date is to subscribe to our Weekly Roundup e-newsletter, and to stay tuned to our blog for updates on farm bill negotiations and many other ongoing food and farm policy news and analysis.