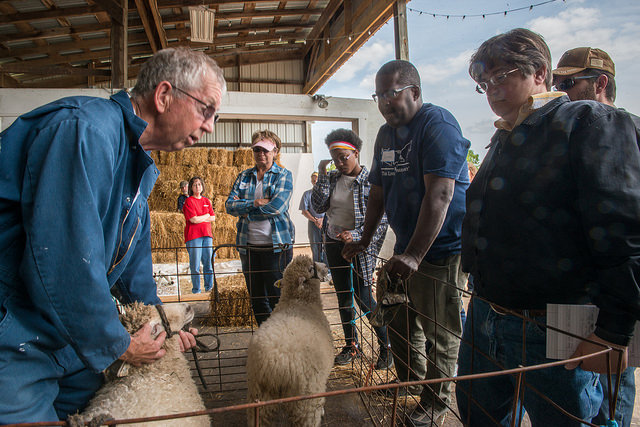 This week, the U.S. Department of Agriculture (USDA) announced a major change, one for which many have been waiting for eight years. Established in the 2008 Farm Bill, USDA’s Office of Advocacy and Outreach (OAO) was intended to give beginning farmers and socially disadvantaged farmers a stronger advocate within USDA, and to better connect with the agency’s programs and services.

Unfortunately, OAO has not always been adequately empowered to serve beginning, minority, and disadvantaged farmers to its fullest potential. The announcement this week that the office would now reside within and report directly to the Office of the Secretary of Agriculture is a big one because it underscores the historic and ongoing importance of OAO’s mission.

NSAC applauds this important change and the signaling by USDA of its rededication to serving beginning, veteran, and socially disadvantaged farmers and ranchers.

The announcement was originally made on a call with organizational partners and stakeholders who serve minority and beginning farmers and and small farms across the country, and followed up later in the week with a USDA blog describing the goals of the agency and the effect of the realignment.

About the Office of Advocacy and Outreach

OAO is USDA’s chief office tasked with serving beginning, minority and other underserved farmers. Congress created OAO in the 2008 Farm Bill in part to address systemic deficiencies in the delivery of USDA programs and services that had resulted in the discrimination of minority and socially disadvantaged farmers and ranchers. It’s mission is both to strengthen the Department’s advocacy on behalf of small farm and new farming opportunity policies/programs, as well as to enhance the Department’s outreach to beginning and socially disadvantaged farmers. OAO is also charged with working across USDA agencies to coordinate their outreach activities.

OAO administers the Outreach and Assistance for Socially Disadvantaged and Veteran Farmers and Ranchers program (also known as the “2501 program”), which provides grants to organizations that work with minority and veteran farmers. The 2501 program addresses critical resource gaps and attempts to fill them by assisting socially disadvantaged farmers in owning and operating farms and participating in USDA programs.

OAO is meant to serve as a champion and advocate within USDA on behalf of underserved farmer constituencies  – a charge the office has not as yet lived up to. It is our hope that the structural change announced by USDA this week also results in a new found dedication to the advocacy mission of the agency.

In order to better fulfill the Congressional intent behind the creation of OAO and to elevate the office’s importance at USDA, OAO will now be realigned and report directly to the Secretary of Agriculture.

According to USDA officials, this change in structure is a proactive step that aims to elevate OAO within the Department in order to create transparent lines of accountability and authority; better facilitate oversight and coordination functions across the Department; and help USDA to continue to provide a more coordinated and holistic approach to outreach to underserved communities.

Jennifer Yezak, USDA’s Chief of Staff within the Office of the Secretary, told stakeholders during this week’s call that:

“The realignment demonstrates the Department’s and OAO’s commitment to maintain the gains of the past few years; continued efforts in developing and building relationships with communities and to broaden that reach with even more communities that may not know about the opportunities that USDA programs can provide; and an effort to identify and garner resources that OAO needs to carry out its mission and function.”

What does this mean for underserved farmers?

Since inception, OAO has had its share of ups and downs. It has faced challenges building trust with and establishing transparency and accountability within the Department, as well as amongst stakeholders. Despite a rocky beginning, NSAC has remained dedicated to the mission of OAO. We continue to believe that the office has a key role to play within the Department as a champion for beginning, minority, veteran, and other underserved farming and ranching populations, and applaud the realignment decision.

We hope that this change will allow the office to become more accountable and effective in coordinating the Department’s outreach activities, and will empower OAO to play an elevated role in small farm advocacy within the Department. We also hope that this realignment will inspire policymakers and other stakeholders to reaffirm their full commitments to diversity and equity.