Who Owns U.S. Farmland, and How Will it Change?

Earlier this month, USDA released new findings that shed some light on who exactly owns the 911 million acres of farmland in the U.S. (excluding Alaska and Hawaii), and how they are managing that land now and in the future. USDA’s National Agricultural Statistics Service (NASS) and the Economic Research Service (ERS) jointly conducted the 2014 Tenure, Ownership, and Transition of Agricultural Land Survey (TOTAL) earlier last year. The results of this survey provide updated statistics to a prior study conducted in 1999.

The updated survey provides a wealth of information on the 2 million landowners who manage or rent out our country’s farmland. Key findings include:

In 1999, NASS (USDA’s data collection agency) undertook the Agricultural Economics and Land Ownership Survey (AELOS), which for the first time, surveyed the owners of our nation’s farmland to better understand how they were managing their land.

The TOTAL survey was conducted in 2014, over 15 years after the AELOS survey, and provides updated information on land ownership income, expenses, debt, assets, and demographic/other landlord characteristics, as well as additional survey questions that address current farm issues. TOTAL is representative of all agricultural land, held by both operating and non-operating landlords, in the contiguous 48 states.

Who owns farmland in the U.S.?

The most recent agricultural census conducted in 2012 revealed that nearly 40 percent of all agricultural land in the U.S. is rented or leased from someone else. This translates to roughly 354 million acres out of the 911 million acres involved in agricultural production nationwide. More than half of the farmland rented out by non-farming landlords was inherited or received as a gift, and the vast majority (87 percent) of these landowners indicated that they are not currently farming, although many of these landlords do have prior experience in farming.

These rental trends have remained relatively steady over the past 15 years when a similar study was conducted. Not surprisingly, owners of farmland are on average older than farmers. The average age of farmers in the U.S. is 58.3, compared to 66.5 for principal landlords, or non-farming owners of rented farmland. More than half (57 percent) of principal landlords were 65 years or older in 2014, while only 18 percent were under 55 years old.

The large numbers of landlords over the age of 65 raises important questions concerning the transfer of the majority of rented farmland in the coming decades.

What does this mean for the next generation of farmers? 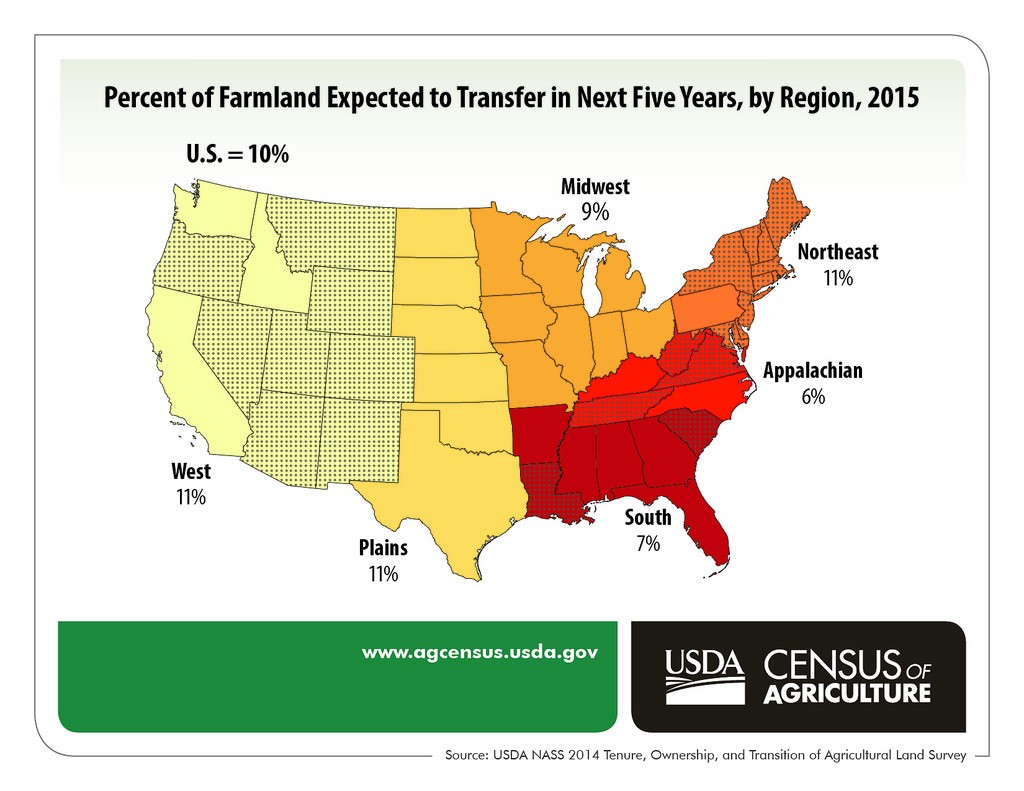 Roughly a tenth of the total 911 million farmland acres of farm and ranchland in the U.S., or about 91.5 million acres, is slated for ownership transfer in the next five years, not including farmland that is in or is expected to be put into wills.

This means that only a small percentage of farmland will be available for new entrants into the farming sector over the next 5 years, and with increasing farm real estate values nationwide, finding affordable land to start or expand a farm will continue to be a challenge. The bulk of these acres that will transition over the next five years are unsurprisingly located across the Great Plains, which has the highest percentage of total land engaged in agricultural production. Kansas, Nebraska, North Dakota, and South Dakota all have over 2 million acres per state that are expected to be transferred to the next generation sometime over the next five years. Texas expects to transfer more farmland than any other state, with over 10 million acres up for grabs.

The West and Midwest also have sizable amounts of farmland that is expected to transfer hands over the coming years, with 2 million acres in California Illinois, Iowa Minnesota, and Missouri becoming available to new farmers or existing farmers wishing to expand production.

The Northeast is expecting to transfer the fewest acres to new farmers over the next five years, with less than 1 million in total across the 10 states in the region. While not surprising, given the relatively few acres of farmland compared to other parts of the country, it will be an even greater challenge for new farmers looking to start farming in the region and who wish to take advantage of access to East Coast local and regional food markets.

Access to land continues to be a challenge for farmers of all kinds, and will remain one of the most significant barriers to farming for the next generation. With the very small amount of farmland that is expected to become available for sale on the open market, new farmers will need to continue to find creative ways to access farmland — including working with land trusts, land-sharing with other farmers, or seeking secure lease terms with long-term rental arrangements.

One response to “Who Owns U.S. Farmland, and How Will it Change?”